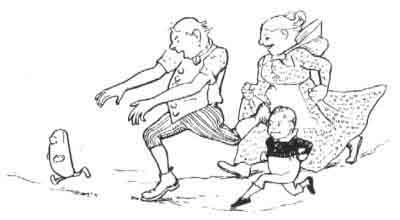 
Once upon a time there was an old man, and an old woman, and a little boy. One morning the old woman made a Johnny-cake, and put it in the oven to bake. 'You watch the Johnny-cake while your father and I go out to work in the garden.' So the old man and the old woman went out and began to hoe potatoes, and left the little boy to tend the oven. But he didn't watch it all the time, and all of a sudden he heard a noise, and he looked up and the oven door popped open, and out of the oven jumped Johnny-cake, and went rolling along end over end, towards the open door of the house. The little boy ran to shut the door, but Johnny-cake was too quick for him and rolled through the door, down the steps, and out into the road long before the little boy could catch him. The little boy ran after him as fast as he could clip it, crying out to his father and mother, who heard the uproar, and threw down their hoes and gave chase too. But Johnny-cake outran all three a long way, and was soon out of sight, while they had to sit down, all out of breath, on a bank to rest.